Summary
Just a great movie. I never heard much about it before it came out but it was instant love after first viewing. It is the ultimate Halloween movie and with a new Horror monster for us to love in a cute way. The movie is composed of all the events that occur in a town on Halloween night. It is told in little stories that mix back and forth with each other. I can only tell it like this..

Red Riding Hood: Anna Paquin plays a girl who is getting ready for a Halloween party. The film makes it to be that all of the older girls are pushing her to lose her “virginity” at a Halloween party. She wears a red riding hood costume and she is looking for a guy. She is being pursued in the woods by a guy in a vampire (Dylan Baker) She beats him and throws him in the party with a broken leg. It is revealed they are all werewolves and her “First time” is when she rips her skin off and feeds.

Carving Pumpkins: Earlier in the night the man (Dylan Baker) poisons a child who doesn’t check is candy. He tries burying the bodies of the dead children in his back yard. His son is yelling at him from the window annoying him. He finishes the job and goes inside to help his son carve a pumpkin. The film makes it out to be that he will murder his son. When he goes to lunge the knife it lands into the severed head of one of his victims. “Don’t forget to help me with the eyes.”

Zombies: A group of kids collect Jack o Lanterns to place as an offering for the souls of mentally challenged kids who were murdered by a bus driver when the bus went into a lake. They bring a witch who is a young girl that they like to pick on. They tell the tale of the kids who died, take her down to the lake and scare her as zombies. When she falls and breaks her glasses the kids laugh and knock the jack o lanterns out. An old myth says to never blow the pumpkins out before midnight. The actual mentally challenged kids rise from the lake as zombies and try to eat the kids. They ask the witch for help but she leaves them to die.

Bus Driver: Following where the kids left off their story. The bus driver who is a bitter old man who scares away a few Trick ‘r Treaters from his door. When Sam (The horror monster) sees this he comes to make him pay. He attacks the bus driver in a brutal fashion that goes on all over the house. The bus driver shoots him to pieces and after pulling his mask off reveals to be some type of pumpkin monster that eats candy. He is about to kill the bus driver with a half bitten sucker (Signature weapon) but sees a candy in his pocket and takes it. Since he was given a treat he will let him live. Hours later the bus driver is handing candy out to the kids when he is visited by the zombies of the mentally challenged kids they proceed to kill him.

Great movie. It was filmed like a comic book and played on these myths of Halloween like never blow out the Jack O lantern before midnight and always give treats and not tricks for Trick ‘r Treats. Always check your candy was a good solid one too. It was original in a horror film, clever, and funny at times. Upon rewatching I saw clues hidden for the werewolf story line. When they are changing they tell the sister if she doesn’t come out then they will “Huff and they will puff” which was all a wolf reference. There are a few clues to their actual nature throughout their scenes. Sam is a great character. He is supposed to be this little kid in makeshift potato sack mask who is seen in every storyline. He is a demon who murders people who do not follow Halloween traditions. I think with a few more well worked movies he could become one of the great horror monsters. The acting overall was good for a lesser known movie. 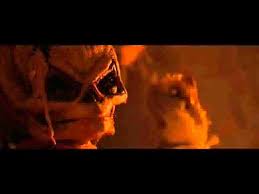 It’s dull in a couple scenes but that is usually forgotten. It’s so original it is hard for me to diss. It is told in a style similar to movies like Crash or Pulp Fiction but with good twists and turns. I can’t hurt it too much.

Fantastic! Best Halloween movie ever! I hope you didn’t even read my review went straight into watching it. 4.5/5

I lied about the next review so don’t hold me to it….it could be anything!